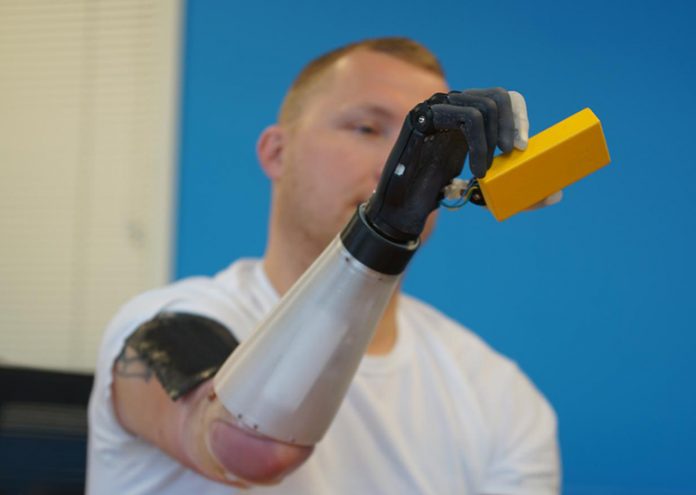 Researchers
from City University of Hong Kong and Northwestern University have developed a
wearable “skin” that can impart a sense of touch through vibrations on the user’s
skin beneath. The device is powered and controlled wirelessly, and could
provide a sense of touch for prosthetic users and aid in rehabilitation.

Imparting a sense of touch for their prosthetic limbs could be a game changer for prosthetic users. However, current technologies to achieve this, which typically use vibratory actuators that stimulate the skin, often require cumbersome batteries and wires to power electric motors. This has limited the application and success of such devices.

This new technology employs a more elegant approach, and uses wireless technologies to move small actuators that require very little power to produce millimeter-scale vibrations. The device consists of a thin and flexible skin-like material that a user can apply to their own skin. The functional components of the wearable are incorporated into an elastomeric layer that is coated in silicone.

By incorporating
a variety of chips and small antennae, the wearable can be powered and
controlled wirelessly, making it convenient to wear and use. The actuators
within the device require very little power to produce a mechanical effect on
the skin that users can feel.

“The haptic
actuators can harvest radio frequency power through the large flexible antenna
within a certain distance, so the user wearing the device can move freely
without the trouble of wires,” said Dr. Yu Xinge, a researcher involved
in the study. “Thus, we
solved the difficult problem of transmission by low-power wireless function and
significantly increased the distance of the operation for our system. This
system not only saves power but also allows users to move more freely without
the trouble of wires.”

As the wearable
is flexible, it can function through a wide range of twisting and bending
motions. At present, the researchers are running a trial to test the potential
of the wearable in allowing prosthetic users to better sense their environment,
which could help them to perform tasks more easily and successfully.

“It can help them to feel the external stimulation with their prosthesis, such as the shape or texture of an object,” said Xinge. “In addition, it can be used for developing virtual scenes for clinical applications.”

See a video about the motivation for this technology:

Here’s a video showing the components of the device: