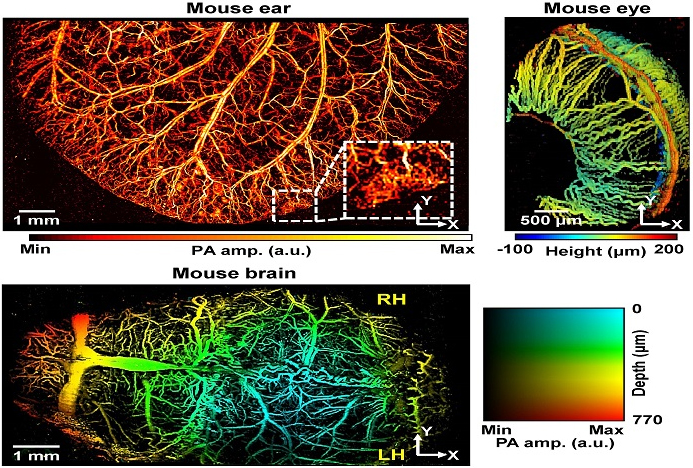 Researchers from Pohang University of Science and Technology in South Korea have developed a new photoacoustic imaging system that can visualize microvasculature without a contrast agent. The new system is 500 times faster than conventional photoacoustic imaging, and features a spatial resolution enhanced by 2.5 times. This system can one day help improve detection and therapy for strokes and heart attacks by imaging vasculature and identifying clotted or burst vessels.

Photoacoustic microscopy is a research tool being used ever more to image anatomy and molecular information in humans and animals. Conventional systems, though, are limited in their scan rate and resolution, resulting in limited ability to visualize small vessels and characterize blood flow. To address this challenge, the researchers developed a new photoacoustic microscopy system.

The new can scan both photoacoustic waves and optical beams simultaneously, due to the development of a custom scanning mirror. Additionally, it uses the naturally present red blood cells as a contrast absorber, helping the system to visualize the blood vessels.

Professor Chulhong Kim, the research lead, said, “We successfully imaged microvessels in the ears, eyes, and brains of mice and a human fingertip with this new photoacoustic microscopy system. What we have developed can be a complimentary tool to the conventional brain imaging system and it can also be a promising tool for future preclinical and clinical studies.”

Via: Pohang
University of Science and Technology