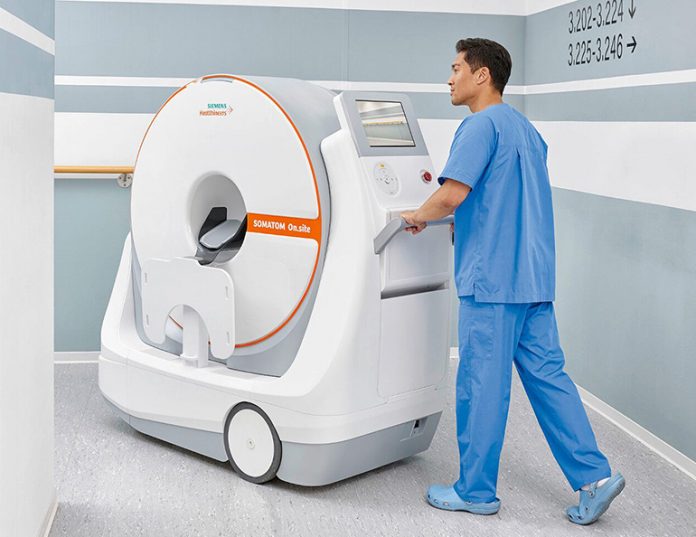 At the ongoing RSNA conference in Chicago, a gathering of the world’s radiologists, Siemens Healthineers introduced its SOMATOM On.site CT scanner that can be wheeled right into patient rooms for bedside exams.

Currently, patients requiring a head CT have to be taken to wherever the scanner is, but the mobility of the SOMATOM On.site allows for the equation to flip. For patients in intensive care units this reduces the risks involved in transportation and doesn’t tie up multiple staff when a single person can transport the SOMATOM On.site on their own. The device even features a front facing camera that displays what’s ahead of the scanner on a built-in screen so that the person transporting it won’t bump into people and objects in the way.

Once in the room, the patient doesn’t even have to get out of bed, since once the bed’s headboard is removed the patient’s head can be positioned inside the scanner. A head holder and shoulder board attached to the scanner help to guarantee that the alignment of the head is straight and accurate. All the tubes and cables remain attached to the patient throughout the exam.

Following the exam, scans are automatically sent over to the hospital’s radiological image database and a staff radiologist can review the scans immediately thereafter. Miiskin first of its kind to be listed on EMIS App...

Nothing Ear 1 True Wireless Stereo Earbuds to come with Active...