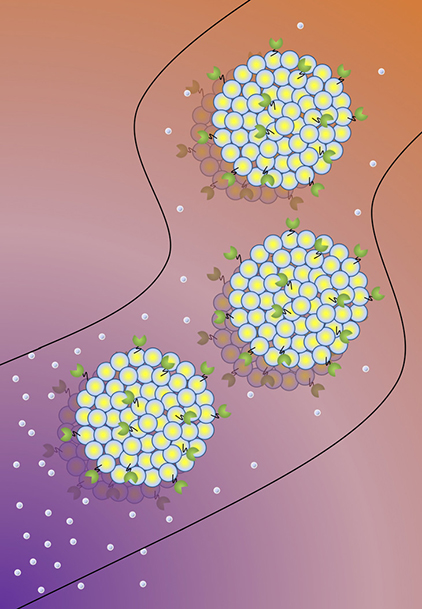 Researchers at Penn State have developed self-propelled liposomes that can migrate towards or away from chemical signals, paving the way for self-directed drug delivery vehicles that can actively target a specific area in the body. The technology may help to enhance efficacy and reduce side-effects of drugs in a variety of applications.

Because of the drawbacks of conventional drug therapies, researchers are developing a wide variety of drug delivery vehicles including nanoparticles, biomaterials, and even implantable devices, to increase drug accumulation at a target site in the body and reduce side-effects elsewhere.

For instance, many liposomes intended for drug delivery are tissue-specific largely because of antibodies on their surface that bind to the target tissue when they encounter it. However, such particles have no way to actively make their way to the target tissue, and are haphazardly carried throughout the body. To address this, these researchers have developed a type of liposome that can actively propel itself towards a chemical signal in the body, such as a chemical attractant released by a target tissue.

“The
futuristic vision is to have drugs delivered by tiny ‘bots’ that can transport
the drug to the specific location where it is needed,” said Ayusman Sen, a researcher
involved in the study. “Currently, if you take an antibiotic for an infection
in your leg, it diffuses throughout your entire body. So, you have to take a
higher dose in order to get enough of the antibiotic to your leg where it is
needed. If we can control the directional movement of a drug-delivery system,
we not only reduce the amount of the drug required but also can increase its
speed of delivery.”

The
liposomes are covered in enzymes that react with specific substrates to produce
energy, which can help to propel the liposomes along, through a phenomenon called
chemotaxis. By altering the enzymes coating the liposomes, the researchers can
tune this chemotaxis and enable the particles to either move towards or away
from the source of the chemical signal. This could help the particles to
gravitate towards certain tissues, and perhaps avoid others in the body.

“We place
the enzyme-coated liposomes in a microfluidic device that maintains a gradient
of either the enzyme’s reactant or its products,” said Ambika Somasundar, another
researcher involved in the study. “We can then measure the movement of the
liposomes towards or away from specific chemicals.”

The researchers are still developing the liposomes, and hope that they will be able to use them for drug delivery soon. “To effectively deliver drugs, you need two things: the ability to carry the drug and the ability to precisely control movement,” said Sen. “The interior of the liposomes that we use can be filled with a payload and we are now getting closer to finely controlling their movement.”

What it's like to wear Nike's HyperAdapt self-lacing sneakers