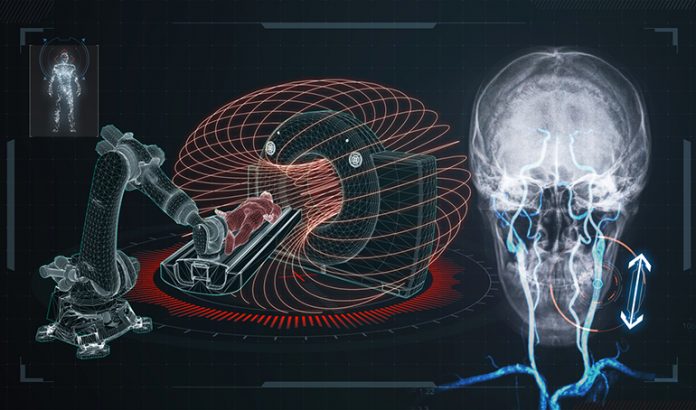 Endovascular surgery has enabled minimally invasive approaches for a huge array of surgical interventions. However, the technique is not without its challenges, and advancing a thin catheter through long and tortuous vasculature can be difficult, with the device potentially getting stuck. In fact, certain areas of the body are inaccessible to endovascular surgeons because of the complexity of their vasculature and the impossibility of advancing a catheter through it using conventional means.

To address
this, these researchers conceived of an external force that could help to pull
a catheter through the vasculature, complementing efforts to push the catheter,
and making it easier to advance it into currently inaccessible areas. Their
technique involves an external magnetic field that acts on a magnetic catheter
tip and a robotic platform to move the patient in relation to the magnetic
field. An MRI scanner provides the magnetic field, although the fringe field
outside the MRI machine is used rather than the uniform field inside.

“Manufacturers
of MRI scanners will normally reduce the fringe field to the minimum,” said Professor
Sylvain Martel, a researcher involved in the study. “The result is a very high-amplitude field that
decays very rapidly. For us, that fringe field represents an excellent solution
that is far superior to the best existing magnetic guidance approaches, and it
is in a peripheral space conducive to human-scale interventions. To the best of
our knowledge, this is the first time that an MRI fringe field has been used
for a medical application.”

The new technique should help broaden what’s possible in minimally invasive surgery, and hopefully make it even safer.