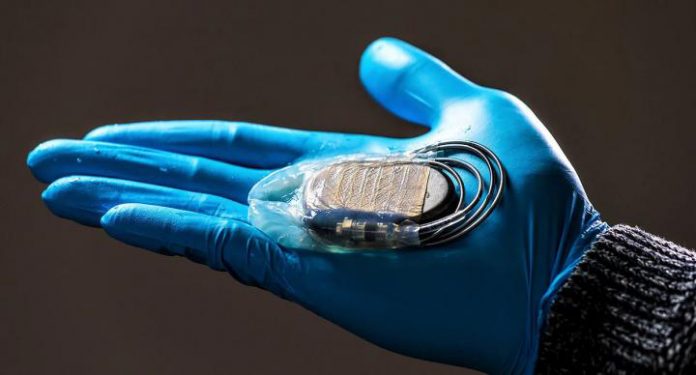 Researchers at ETH Zurich have developed a cellulose membrane to cover and protect implantable devices, such as pacemakers. The material can reduce fibrotic build up and make subsequent surgical removal of implants much easier. So far, the pouch-like device has been tested successfully in pigs, and the researchers hope to apply for clinical trials in conjunction with an ETH spin-off company called Hylomorph, with the eventual goal of commercializing the technology.

The foreign
body response is a significant issue for a variety of implantable medical
devices. Pervasive immune attack leads to fibrosis and the development of a fibrotic
capsule that can restrict device function and longevity. A variety of coatings
and drug treatments have been tested to reduce or mitigate the foreign body
response to implantable devices, so far with mixed or limited success.

This latest technology is intended to protect cardiac pacemakers from the growth of fibrotic tissue. Fibrosis is a serious issue for pacemakers, which are intended for long-term implantation. “Every pacemaker has to be replaced at some point. When this time comes, typically after about five years when the device’s battery expires, the patient has to undergo surgery,” said Aldo Ferrari, a researcher involved in the study. “If too much fibrotic tissue has formed around the pacemaker, it complicates the procedure.”

Surgeons
often need to cut the excess fibrotic tissue away, increasing the chance of
complications during and after surgery. Consequently, there is a need to
develop new strategies to reduce the build-up of a fibrotic capsule around
pacemakers.

To address
this, these researchers have developed a cellulose membrane that can cover
pacemakers, and which significantly reduces fibrosis. Ironically, the fibrous nature
of the membrane is a factor in its inhibition of fibrosis. “When fibrotic
tissue forms, the first stage is the deposition of proteins on the surface. A
fibrous membrane surface impedes this process,” explained Francesco Robotti,
another researcher involved in the study.

The
membrane was also designed to contain numerous honeycomb-like surface
indentations. “These indentations make it difficult for the cells that form
fibrotic tissue to adhere to the surface – the second stage in the formation
processes,” added Robotti.

New System Speeds Up Typing for the Motor Impaired