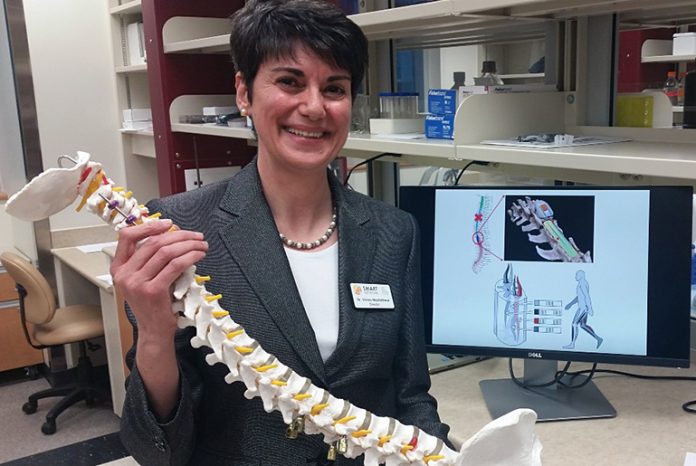 Researchers from the University of Alberta in Canada have used novel platinum/iridium microelectrodes to create a functional map of the lower spinal cord in monkeys, demonstrating how different segments of the spinal cord control lower limb movement. This development may one day be used for rehabilitation of patients with paralysis.

The spinal cord is a complex part of our nervous system, regulating our breathing, gait, and bowels. Thus, stimulation of the spinal cord has been studied for re-animating paralyzed limbs and improving recovery. In order to have controlled, intended effects, many researchers have studied the organizational structure of feline spinal cords. However, these differ significantly from human spinal cords, so to address this issue, the Alberta researchers used an implantable microelectrode to study the spinal cord organization of macaque monkeys.

The researchers used platinum/iridium microelectrodes (75 µm diameter) along with a spine-mounted stereotactic system for highly precise spatial control of microelectrode placement. The electrodes were placed in 3D every 2 mm in one direction and every 0.5 mm in the other two, allowing for high-resolution volumetric mapping. Stimulation of between 10 µA to 300 µA at 50 Hz was used at each location. Limb movements were studied by placing reflective markers at key limb positions and recording with a camera.

“We think that intraspinal stimulation itself will get people to start walking longer and longer, and maybe even faster,” said Vivian Mushahwar, lead author of the study appearing in journal Scientific Reports, and professor at University of Alberta. “That in itself becomes their therapy. Imagine the future. A person just thinks and commands are transmitted to the spinal cord. People stand up and walk. This is the dream.”

The study in journal Scientific Reports: Functional organization of motor networks in the lumbosacral spinal cord of non-human primates

Via: University
of Alberta Amazon trims the price on the Garmin Forerunner 735XT by 30%

?Xiaomi Mi Watch hits UK and Europe – but no US...