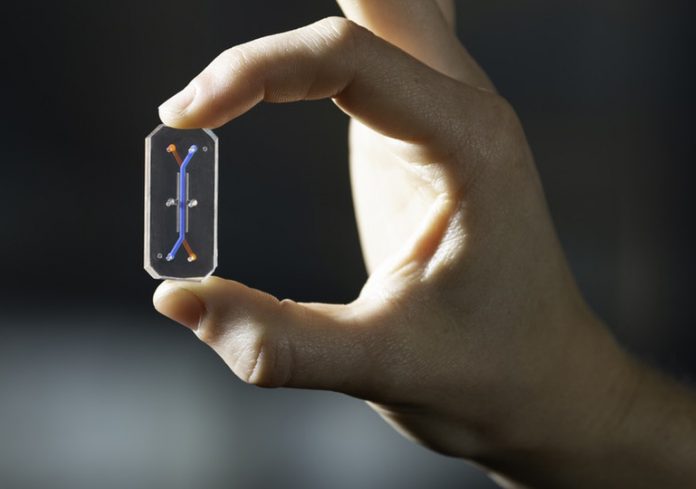 Low liver toxicity is a major hurdle that drug candidates have to demonstrate before they are used as therapeutic medications. This testing is usually performed using animals, including rodents and dogs, with livers that aren’t quite like ours. Animal studies are useful, but they often result in misleading information, which may not be realized until long into the drug development process. Sometimes, patients are injured by such drug candidates when liver toxicity isn’t properly assessed ahead of time.

Now, a research collaboration involving scientists from Emulate, a Boston-based firm, AstraZeneca, Janssen Research & Development, and Harvard’s Wyss Institute is reporting that a device called Liver-Chip can faithfully replicate how a liver responds to different compounds, and that this response can be easily observed using the device in real time. The technology, originally developed at Harvard’s Wyss Institute, should help speed the development of new drugs, help prove the safety of drug compounds, and potentially help to reduce the number of animals that are subjected to pre-clinical studies.

The transparent device is the size of a domino piece, and it has parallel microchannels within that have living cells on the interior. The channels and the types of living cells that are placed inside essentially recreate organs at their very basic level, something that works very well with livers, which are made of millions of identical components. By delivering various chemical compounds, along with the media that the cells need, one can actually see the response of the living cells inside using a microscope.

Seeded with rat, dog, or human liver cells, the Liver-Chip was tested to evaluate whether compounds known to be toxic to livers would indeed act the same within the device. Indeed, it seems that the technology may already be practical to use in addition to animal tests, as it was able to demonstrate that a compound called FIAU is toxic to human livers, while being less so to dog and rat livers. The same was tried and demonstrated using drug candidates provided by Janssen.

“This is an important milestone in the effort to improve the drug discovery and development process that was achieved by leveraging the Wyss Institute’s unique translational model, which allowed us to evaluate the promise of Organ-Chips both technically and commercially early on in the development of the technology,” said Geraldine A. Hamilton, Ph.D., President and Chief Scientific Officer of Emulate, and corresponding author of the study, appearing in Science Translational Medicine. “We are excited to see what advances our customers will be able to achieve using this Liver-Chip, and we are grateful for the opportunity to impact the drug discovery and development process and make a difference in the lives of patients.”

“This work represents a major achievement for the Organ Chip field because it shows the power of this technology to provide insight into human-relevant responses where current preclinical animal models often fail. This needs to be evaluated and confirmed by others, but if it is, then this could change the way drugs are developed around the world and help begin to reduce the numbers of animals that are used in drug development efforts worldwide,” added study co-author and Harvard professor Don Ingber.