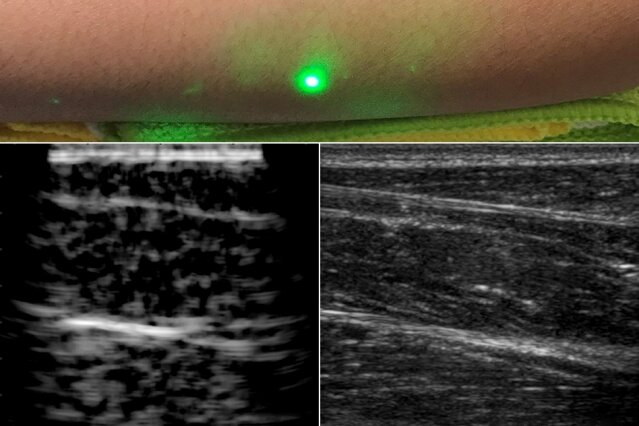 Clinical non-invasive ultrasounds require their transducers to make contact with the skin, as that allows high frequency vibrations to travel through the body. Many patients, including children, people with burns, and those with sensitive skin would rather be scanned using a contact-free system. Researchers at MIT have now shown that it is indeed possible to use lasers to perform ultrasound scans at a distance.

Optoacoustic imaging involves using a laser to induce sound waves within tissues and to pick up the ultrasonic reflections with a detector that still has to make physical contact. Moreover, such scanning only works at very shallow depths, effectively only imaging a few millimeters below the skin.

The MIT team have now developed a way to detect ultrasonic vibrations on the skin using a laser, so that one laser can be used to resonate the skin while another detects the vibrations.

This is a major development, and such technology may revolutionize the field of ultrasound. Since with conventional ultrasounds skin contact severely modulates the resulting signal, a contact-free approach may overcome that limitation entirely.

The researchers have already tested their system with healthy volunteers, scanning their forearms from a half meter away and comparing those results with those of conventional ultrasound. They were able to observe as deep as 6 centimeters into tissues and could see muscles, fat, and bones, reporting that their results were comparable with standard ultrasound.

“We’re at the beginning of what we could do with laser ultrasound,” said Brian W. Anthony, a principal research scientist in MIT’s Department of Mechanical Engineering and Institute for Medical Engineering and Science (IMES), and a senior author of the study appearing in journal Light: Science & Applications. “Imagine we get to a point where we can do everything ultrasound can do now, but at a distance. This gives you a whole new way of seeing organs inside the body and determining properties of deep tissue, without making contact with the patient.”

Some details according to an MIT announcement:

Based on their research, the team selected 1,550-nanometer lasers, a wavelength which is highly absorbed by water (and is eye- and skin-safe with a large safety margin). As skin is essentially composed of water, the team reasoned that it should efficiently absorb this light, and heat up and expand in response. As it oscillates back to its normal state, the skin itself should produce sound waves that propagate through the body.

The researchers tested this idea with a laser setup, using one pulsed laser set at 1,550 nanometers to generate sound waves, and a second continuous laser, tuned to the same wavelength, to remotely detect reflected sound waves. This second laser is a sensitive motion detector that measures vibrations on the skin surface caused by the sound waves bouncing off muscle, fat, and other tissues. Skin surface motion, generated by the reflected sound waves, causes a change in the laser’s frequency, which can be measured. By mechanically scanning the lasers over the body, scientists can acquire data at different locations and generate an image of the region.