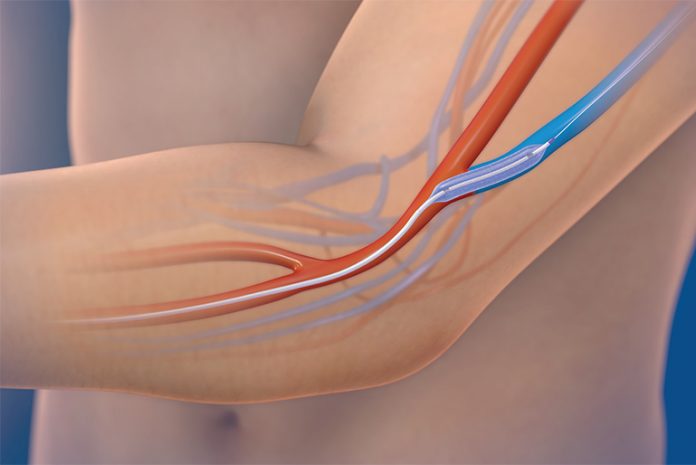 End-stage renal disease (ESRD) patients experiencing kidney failure typically require hemodialysis in order to artificially remove fluid and waste from blood and maintain appropriate electrolyte concentrations. For many patients on hemodialysis, an arteriovenous (AV) fistula is created to link an artery to a vein. Veins are too fragile for frequent access, but arteries are too deep. Creating an AV fistula makes the vein that is linked to an artery more resilient and capable of providing regular vascular access for dialysis.

While effective, and a standard of care for ESRD patients, vessel restenosis can occur over time and limit the efficacy of the fistula. This is both dangerous to patients and costly to the healthcare system, as patients can require frequent reinterventions to maintain patency of the fistula.

To address this challenge, Medtronic is taking advantage of its existing IN.PACT Admiral drug-coated balloon (DCB) platform previously developed to treat peripheral artery disease. The system uses an inflatable balloon coated in paclitaxel, an anti-proliferative agent, to increase blood flow and reduce thickening of the vessel wall. In 2016, the IN.PACT Admiral DCB CE mark was expanded for treatment of failing AV fistulae in Europe and, as of last month, is now FDA approved under the IN.PACT AV DCB brand in the U.S.

Medgadget: Thank you for taking the time to tell us more about Medtronic’s latest approval. For background, can you characterize AV fistula failure?

Mark Pacyna: Mature AV fistulae tend to fail over time due to restenosis, or narrowing, of the vessel. More often than not, this restenosis recurs frequently. This often leads to multiple procedures to ensure the vessel stays open in order for ESRD patients to receive dialysis therapy without interruptions.

Medgadget: What is the standard of care today to address a failing AV fistula?

Medgadget: How does the IN.PACT AV drug-coated balloon work to address a failing AV fistula?

Pacyna: The IN.PACT AV DCB is coated with a unique combination of paclitaxel, an anti-proliferative drug, and an excipient, urea. This unique formulation allows the drug to be rapidly transferred to the vessel wall and remain in the vessel for up to 180 days, thereby minimizing the potential for restenosis.

Medgadget: The IN.PACT AV DCB is based on Medtronic’s IN.PACT Admiral platform. Can you share a little about the translation of the original device designed to treat peripheral artery disease into this new use case?

Pacyna: Although the pathophysiology of stenosis in the superficial
femoral artery (SFA) differs from the pathophysiology of AV fistula stenosis,
paclitaxel-coated balloons have proven to be highly effective in treating
stenosis in both vessel beds compared to plain balloon angioplasty due to the
anti-proliferative nature of the delivered drug. This was also confirmed in our
own clinical studies for IN.PACT Admiral and IN.PACT AV DCBs.

The key difference between IN.PACT AV and IN.PACT Admiral is the sizing of the balloons. The drug type (Paclitaxel), excipient (Urea), and dose (3.5ug/mm2) are the same in both. IN.PACT AV DCB is available in lengths ranging from 40mm-150mm and 4.0-12.0 French sizes, on shaft lengths of 40mm, 80mm, and 130mm. These are considered ideal sizes for treating AV fistulae.

Medgadget: What were some of the clinical outcomes that led to IN.PACT AV DCB’s approval?

Pacyna: Overall, clinical data from our IN.PACT AV Access trial demonstrated that through six months, patients treated with IN.PACT AV DCB maintained patency longer and required 56% fewer reinterventions compared to those treated with standard PTA. Furthermore, through 12 months the data also showed no difference in mortality rates between the IN.PACT AV DCB group and the PTA control group. IN.PACT AV DCB is also the only DCB indicated for failing AV fistulae to meet both primary and secondary endpoints in a clinical study.

NICE recommends insomnia app as an alternative to medication