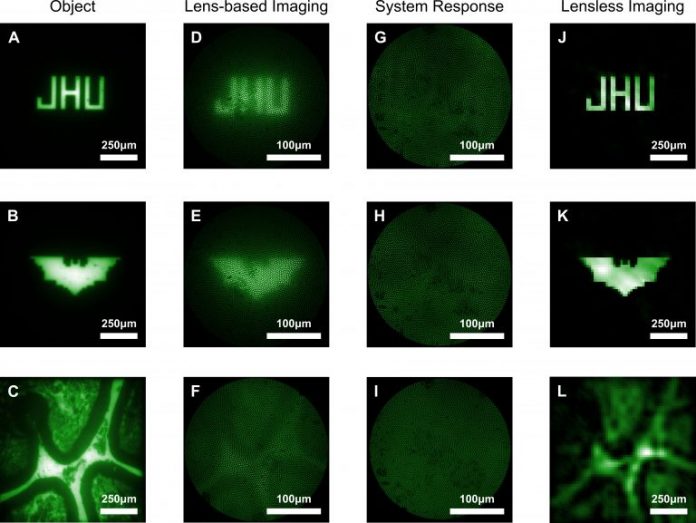 Some of the latest technologies for studying the brain allow scientists to see which neurons fire in response to different stimuli. While this capability is pretty remarkable, it requires scientists to be able to see into the parts of the brain they’re studying. Microendoscopes exist for such tasks, but they can never be small enough when the brain is involved. Smaller endoscopes result in less damage to tissues and can get into tiny crevices, allowing for studies that otherwise would be impossible.

Now, researchers at Johns Hopkins University are reporting the smallest, most advanced microendoscope yet. The lens-free device is only a few hairs in width, and can produce remarkably sharp images of very small objects. Moreover, it doesn’t require movement to focus on things at different distances.

The smallest existing microendoscopes are about one half of a millimeter in width and use lenses to sharpen the image, which can be even wider. Current lensless microendoscopes suffer from loss of image when they’re moved even slightly.

The new devices relies on a “coded aperture,” which is a flat grid with a random pattern that creates a projection. Though this image resembles noise, it allows the device to understand where the light is coming from and to reconstruct the source of the image. “For thousands of years, the goal has been to make an image as clear as possible,” said Mark Foster, the corresponding author of the study appearing in journal Science Advances. “Now, thanks to computational reconstruction, we can purposefully capture something that looks awful and counterintuitively end up with a clearer final image.”

Because the focusing is performed computationally, the device doesn’t need to be moved toward or away from the object in order to achieve perfect focus.

The researchers imaged tiny beads using their new microendoscope and compared the results to existing devices. The results, which can be viewed above, are quite remarkable and should allow scientists studying the brain to observe ever smaller structures and to understand their functional interrelationships.

The next steps will involve evaluating the new device on small animals using fluorescence labeling procedures, which are now the mainstay of neurological research. What is Fitbit Premium and is it worth it? We explain it all

Health-tracking graphene tattoos are the latest step on the path to...