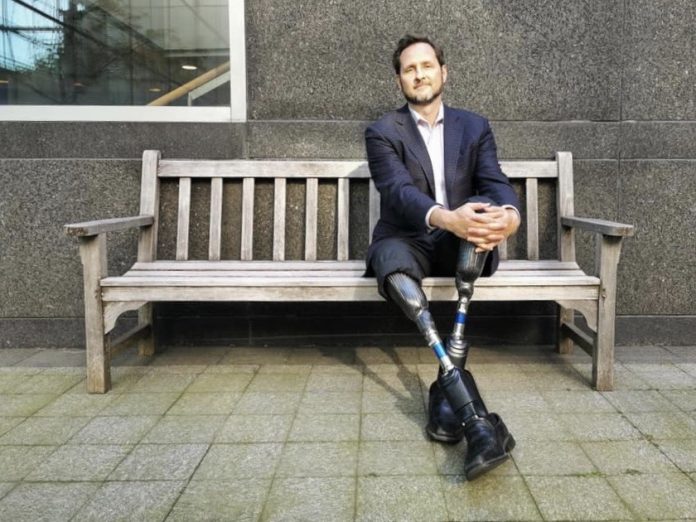 Two young and extremely talented rock and ice climbers set out to summit Mt. Washington, the highest peak in the Northeastern United States (6,288 feet) and considered to be the world’s most dangerous small mountain, in January of 1982. Despite careful planning, an unfortunate turn in the weather caused Hugh Herr and his friend Jeff Batzer to descend on the wrong side of the mountain, forced to hike through the Siberian-cold nights to keep from freezing to death. Thankfully, on the fourth day, local EMS efforts were directed to where the men were sheltering under a rock. Unfortunately, this incident resulted in amputation of Herr’s feet six inches below the knees due to gangrene. Batzer lost his toes, left foot, and right-hand fingers as well.

When I spoke to Dr. Herr at this year’s “Science in the Age of Experience” conference hosted by Dassault Systèmes, he shared that it wasn’t until after he and his friend had been stabilized that they heard the horrific news: an avalanche had wiped two of their rescuers off the trail, and one of them, a dedicated young man named Albert Dow, had died.

Herr shared that he felt an
overwhelming amount of shame and guilt over Dow’s death, and needing to be
rescued at all, because it felt like a violation of everything he held sacred
as an outdoorsman and human being. “So much of what I do is done in his memory:
Albert was an extraordinary person who was very giving and empathetic towards
other humans. It would be a disgrace to his memory if I were to just give up.”

As a previously elite climber, Herr had no idea what his future might look like, as doctors and therapists told him he would never climb again. However, it was mind over matter for Herr, and as soon as his first set of prostheses were installed, he immediately tried bouldering in them. Despite excruciating pain, he discovered that he could indeed climb.

Thus began his dedicated efforts to continually design and re-design better prostheses for climbing, to the point that he was back on the wall as an elite climber; he logged more than twenty 5.11s and 5.12s grade climbs, including one 5.12-plus that first summer of 1982.

During his talk at the conference, Dr. Herr shared that a fellow climber angrily declared he was cheating by using prostheses. However, he welcomed this, because above all, he despised pity and being labeled as courageous, and for others to experience jealousy or envy over his predicament meant that he was competitive and considered a threat.

Fast forward in time, Dr. Herr went on to earn a master’s degree from MIT in mechanical engineering and a doctorate in biophysics from Harvard University, subsequently completing a post-doctorate in medical devices at MIT. Dr. Herr is currently an MIT Media Lab professor, Head of the Biomechatronics Research Group, and the founder of BionX, originally started as iWalk in 2006. He also co-drives the Center for Extreme Bionics.

Dr. Herr’s visions include advancing the human body to be able to achieve new heights, and imagining future worlds with futuristic limbs, in which design informs biology. His research and work has led to an emerging field of biology in which bionic prostheses can interface with existing human anatomy in a way where the robot literally becomes a part of the person.

To give an example: oftentimes, amputation results in a situation where the person no longer has proprioception, the perception or awareness of the position and movement of one’s body. In some cases, the person continues to have a phantom awareness of their amputated limb, so that it feels like their feet are stuck in a ski boot, with the muscles stitched down such that they can’t move.

Dr. Herr has pushed innovation forward in a way that closes the loop between the brain and synthetic structure, and fundamentally changes how the limbs are amputated with the design of the new bionic prosthetics taken into account. His invention for making this happen is what he calls the agonist-antagonist myoneural interface (AMI). For every muscle pair, there is one AMI. Synthetic sensors are added onto each muscle to mimic proprioception, so that the human brain informs how the robot moves while also receiving neural feedback from the robot.

At the conference, Dr. Herr presented a very interesting relating to a friend of his who had a similar climbing accident. Thanks to new advances in his technology and surgical amputation techniques, his friend’s synovial canals served as biological bearings for AMI pairs. The way that this was implemented allows the nervous system to be able to feel physical loads on the prostheses and to receive additional signals. This allows for symmetry between the biological and bionic sides, so that both inversion and eversion of the feet is present. Dr. Herr’s friend Jim was able to walk up stairs, and after just a few hours, make gestures with the foot – at some point, even shaking something off of the bottom of the shoe. Since Jim’s brain was receiving signals, he was able to use his new bionic limb as a part of him, without needing to be conscious of all of the intricate movements (especially since some spinal control is involuntary). In this case, there was “neurological embodiment” – where what we design comes part of us.

Dr. Herr sees a world where through technology, people can be freed from being seen as disabled, and instead seen as powerful and able.

Alice Ferng, Medgadget: Tell us more about the bionics you
are wearing and how they work. Do you have multiple pairs of legs?

Dr. Herr: Yes. Probably like when I go into each of your closets, you see lots of shoes. When you go in my closet, you see lots of legs. Same thing. The legs I’m wearing right now are called “Empower” – the fundamental designs for them were done first at my MIT lab, and then an MIT startup was established. Recently, a German company called Ottobock bought the company. The Empower has been fit to approximately 3,000 people. Half have been wounded soldiers. Every quarter and every year, we fit more and more people. It’s the first powered, bionic, foot-ankle that to some degree emulates the lost muscles. Most foot-ankle protheses are passive like a bicycle is passive. So the energy to move comes 100% from the person. That’s not true with me – a huge amount of the energy to move is provided by my bionics.

Medgadget:
How do you
deal with phantom pain and painful neuromas?

Dr.
Herr: There’s a
wonderful pain mitigation story. When the muscles are dynamic, they don’t
atrophy (or get smaller or smaller with time), which is important for comfort
and the mechanical interface.

The AMI surgery has a benefit
beyond brain control of mechatronics that I haven’t yet mentioned: phantom pain
or residual pain is greatly reduced or eliminated with AMI. In previous
amputation procedures, nerves are cut and left blowing in the wind, which
results in a neuroma formation that can be very painful. Nerves live to
innervate skins and muscle cells, so you need to give the nerve what it wants
or it will be problematic. Surgeons can cut back neuromas and put muscle bodies
there; there’s a revolution happening in the surgical realm with mechatronics.

Medgadget: Let’s talk a bit more about AMI and
how that works. It’s amazing how your friend had such great proprioception just
a few hours after his operation. How does AI factor in?

Dr. Herr: So we’ve already demonstrated the
force and torque feedback in the lab. AMI has two muscles, and you can artificially
stimulate muscle A to vary the force on muscle B. Then with the Golgi tendon
organs, then the brain has that force information.

In the cloud, you have examples of tens
and thousands of other humans – what their feedback was on a particular day,
position, and dynamics. You can be informed with that very large data set. The
old idea of telepresence is going to be made possible through bionic
technology. If we have interfaces to our nerves and we can artificially input
force, even when there’s no actual force on the muscle, then when the humanoid empowers
us and goes and lifts weight in the Parisian gym, the person lying in bed will actually
feel the barbell. Terrifying, I know.

Medgadget: How do you imagine the prostheses of the future?

Dr. Herr:
I think in the
laboratory, amputation will largely be solved two decades from now if funding
continues. What I mean by that is that with amputation, we’ll be able to
restore limb and motor function. Beyond that, of course, is augmentation. The
classic story of augmentation is that with people with prostheses or
exoskeletons, we will all be augmented in the future. If you’re hiking across
rough terrain in the wilderness, technology will know where you are and will
know the nature of your dynamics and steps. Imagine when you walk across a
trail, there was 10,000 people that walked across that trail before you, so
there will be a lot of data of how to walk that trail most efficiently. Our very
movements will be completely optimized by taping into a broad knowledge base of
many other humans that have experienced the same experience. So there’s many
examples of how we’ll augment things. As Aimee Mullins and Viktoria Modesta has
most recently demonstrated, these bionics can be objects of beauty; they can be
sculptures that represent human beauty or non-human beauty. That exploration is
a great deal of fun.

Medgadget:
This
technology is no doubt very expensive – are you working to reduce the cost?

Dr.
Herr: The cost of
the foot-ankle here is about $30,000 USD; this a solid automobile cost per leg.
As with all technology at scale, the cost will come down more and more. I’m now
looking for funding to create a mobile prosthetic, bionic bus – I know this is
a terrible name – but imagine an automobile, where you just pack it with all
types of fabrication and imaging and validation tools. Then you can drive to
all remote areas of the world and build people body parts right there. I think
a model like that could be very inexpensive and may be in reach of
philanthropic dollars. We’re looking for research funding to build a prototype
of that mobile platform.

Medgadget:
You showed
bionic shoes during your talk – when might these hit the market, and what might
the cost be?

Dr. Herr: I hope very, very soon. You know those hoverboards? There’s no reason it can’t be that price point or lower if you’re selling millions a year. $400-500 maybe. I want to merge bionic science and technology with incredible fashion design – and make them not only high-functioning, but also aesthetically compelling. The exoskeletal world is where the computers were in the 60s and 70s, where they were really big and ugly and didn’t work so well. And Steve Jobs’s vision was that we’d all have computers in our pockets, and that they’d be aesthetically pleasing. I think the shoe will be the first exoskeleton that’s a massive commercial success.