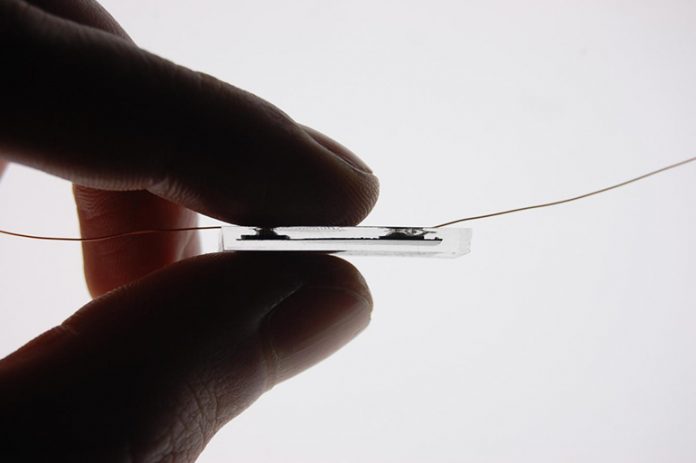 Researchers at Imperial College London have developed a way to create a tight bond between rubber and electrical components. The method could pave the way for a variety of soft sensors for medical applications. For instance, such sensors could provide a signal when squeezed or stretched, with potential in monitoring patient rehabilitation after hand injury, or functioning as respiration monitors by providing data on the expansion and contraction of the chest.

One of the major difficulties in developing such devices to date has been integrating electrical components smoothly and securely in soft substrates, such as rubber. This group of researchers has come up with a new approach to this problem. Their technique results in an incredibly strong bond between rubber and electrical components, and when tested to failure, the rubber itself will break before the bond will.

Previous
attempts to bind rubber and plastic have involved adhesives or clamps, which either
came apart under force, or damaged the soft material. This new approach involves
metal-coated silicon that can chemically bond to the rubber, but that also
features copper plates to which electrical components, such as wires, can be
attached through soldering.

The new
material has enormous potential in wearable healthcare sensors. “We hope this
method will allow us to make low-cost soft sensors that are reliable and
portable, that can be used to monitor people’s health in their own homes,” said
Michael Kasimatis, a researcher involved in the study. “Such sensors could be
coupled with a mobile device, such as a smartphone, so that the data they
generate can be easily processed and stored on the cloud, which is important
for applications in digital healthcare.”

So far, the
researchers have made some prototype sensors, including a squeezable ball to
monitor progress in hand rehabilitation, and a stretchy band that goes around
the chest and monitors breathing. “Having successfully demonstrated how this
new bonding approach could work and be applied in laboratory prototypes, we now
want to take this technology out of the lab and make it available to everyone,”
said Firat Güder, another researcher involved in the study.

See a video about the new techonlogy below:

Amazon drops Fitbit Ace fitness tracker for kids to $60 on...